Afia Schwarzenegger Wrestle NPP Foot Soldiers – How much is GH¢50,000?’

Clearly tired of savages and being effective in the media space after she professed to have gotten GH¢50,000 memorial service gift from the Chief of Staff, Afia Schwarzenegger has has vented out her anger on social media.

Prior, Afia Schwarzenegger, shortly after laying her late father to rest in Kumasi, faced the wrath of Ghanaians after spilling out that Mrs. Frema Osei-Opare, supported her with GHC50,000 and helped fly her father’s coffin to Ghana.

A few Ghanaians, especially, some New Patriotic Party (NPP) foot soldiers have launched series of online protests against the government over inefficient utilization of state assets and claims of abandonment.

The NPP foot soldiers, while lamenting that the paty has turned their backs at them, disclosed that the governemnt was able to furnish ‘unworthy’ Afia Schwarzenegger with a whopping GHC50,000.

It was also reported that the office of the Chief of Staff has debunked claims of donating such an amount to Afia Schwarzenegger.

All these and more triggered Afia who feels betrayed by the same party she claim to have rigorously campaigned during the 2020 elections, to vent out on social media.

In a 1 minute 29 seconds video chanced on her Instagram page, Afia launched scathing attacks at the NPP for what she described as ungratefulness and a ‘stab in the back’.

“Can you pay me for all the times I campaigned for you? I’m still shocked you could do this because I risked my life to campaign for the NPP. In one of our campaign expeditions, we had an accident and I was on that particular trip with a guy named Awudu. Till date, he has been bed-ridden and the party has abandoned him. The worst part is, till date, the guy’s family thinks that the party has given me bundles of money and I have refused to give them their share. The car we had the accident with was even someone’s car.

“Do you think GH¢50,000 is money? GHC50,000? [spits on the floor] GHc50,000 is that much for you? It’s that much that you wouldn’t let me rest? You guys have carried me on your heads roaming from one platform to the other? Now members of the party have also formed all sorts of alliances to protest the money I was given. If I had charged for all the services I have rendered to the party, would you be able to pay me for it? I’m sick and tired of all these,” she disclosed.

Afia whiles ranting also insisted that she was indeed given such an amount by the Chief of Staff.

“I don’t know why some people are also foolish enough to believe that I would broadcast about monies that politicians have given me, if they really haven’t given me. If the Chief of Staff had not given me money, there’s no way I would’ve said she has. Let Antoa kill me if I haven’t received any money of that sort. Let it also kill all the party members involved including those who have turned their backs at me if I’m speaking lies”. 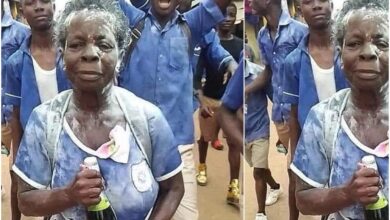