Bhim Stonebwoy’s Reaction after Shatta Wale called him a cripple at soundclash (Watch). Shatta Wale and Stonebwoy finally clashed with each other at the Asaase Fm soundclash over the weekend at the premises of Asaase FM in Accra.

Bhim Nation president Stonebwoy we all know has a problem with his leg after he got involved in an accident where he lost his twin brother some years ago.

Well, during the clash Shatta Wale used his(Stonebwoy) deformity against him and for the first time the Bhim Nation president failed to react in an angry mood.

Before the start of the show, the MC for the event DJ Seani B from BBC radio advised that both parties keep the clash clean.

He went on to tell both Shatta Wale and Stonebwoy not to use foul words during their clash as well as not to take it too personal as if they are beefing with each other.

But Shatta Wale along the way forgot about earlier advise and called Stonebwoy a cripple when he was asking his DJ to drop a song for his opponent.

The show witnessed amazing back to back performances from Stonebwoy and Shatta Wale as they thrilled fans to wonderful music.

Though the organizers never declared anyone as the official winner, fans of both artistes are still on social media declaring their favourite as the winner.

Watch the video below: 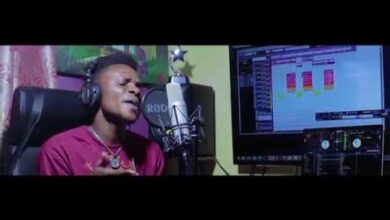