D-Black’s Hot “Atopa” Leak – Cute Lady In The Video Speaks. It was a beautiful Thursday on exactly September 17, when a scandalous clip featuring Ghana’s nonfa rapper D-Black surfaced. Inside the video is various things beyond description nor subscription. In fact we saw things.

In the said video, D Black who is struggling to get a hit song for the past 3 years could be heard speaking in tongues as he devours the w0man while the lady (Adrienne Nicole) who could not hold the enjoyment m0an like COVID-19, as well as HIV, is no longer in existence.

Regardless, netizens have chastised D Black for such shameful and disgraceful act. Well, things seem to be getting better for D Black, because the identity of the Lady he was ‘eating’ is out and has broken her silence.

According to Adrienne Nicole, she lost her phone and the one who had access issued series of thr£ats and b1ackmailing techniques to lure her to pay.

She said she reported the case to the police but the threats kept coming. She added she broke up with D-Black long before their clip hits online.

“About a week ago I lost my phone. And I posted on online that I lost my phone. I didn’t think about anything negative about it then the next minute I started getting threats and somebody asking me for money else they’re gonna post my personal photos and videos on social media.”

“I had to report to the police here to take care of it. But I keep getting threats and requests from different social media pages. And when I click to check those pages, they had started posting personal photos and videos of me and my Ghanaian partner (with whom I’ve even broke up with). Apart from reporting to the cyber crimes unit of the police here, I’ve directly contacted the social media platform owners and they have taken down 2 of those parody accounts. But they keep using other pages and channels as well.”

“I’m issuing this statement because I don’t want my private issues circulated out there, neither do I want same for my ex. It’s not intentional for it to happen so I need to publicly issue this statement to let the world know while I engage the right channels to do the needful.” 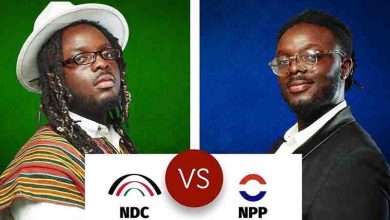