The action by the group is believed to have taken place on the dawn of Friday, September 25, 2020.

Most passengers travelling to areas in the Volta Region including Tefle, Tsopoli and Juapong have all been left stranded as a result of the development.

Citi News understands some three persons have suffered gunshots wounds. There are also reports of attacks on a number of police posts amidst the burning of tyres. “The Western Togoland members have blocked all the roads in the Volta region. We don’t know what is going on because we are unable to go close to them. There are some navy personnel around. We have left our buses to go to Sogakope. We do not know what will happen amidst the gunshots the people are firing”, one of the stranded travellers told Citi News.

A local-based reporter, Thompson Ayumu on the Citi Breakfast Show narrated the incident with his eyewitness account.

“Thousands of blocks were put on the roads and according to those in the first vehicle that got there; their mobile phones were taken from them by those who had blocked the road. Subsequently, all other vehicles were unable to get close to the place because they got to know what was going on there. Later on around 5:30 am the police and military came in to rescue the situation but people had gone into the bush and didn’t want to come close to the roadside.

He has also disclosed that the police and its agents have so far ensured order.

“Now, the road has been cleared now. I am talking about the Tema-Akosombo road. The place is between Kpong and Atimpoku. Now everything has been cleared away. The MCE and some security personnel are here and the people have left”, he added.

Reasons Why I Dumped Emmanuel Adebayor - Dillish Mattews Speaks Out 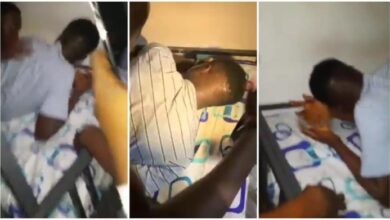 See Wat Students Did To A Maye After His Girlfriend Dumped Him, Story Is Sad (Video Below)