Ghanaian prophet Stephen Akwasi, better known as Jesus Ahoufe has been picked up by the police following his prophecy that Shatta Wale will be shot by some unknown assailants.

Personnel from the Police Service arrested the man of God in the early hours of Tuesday, October 19, 2021, at the premises of Accra-based radio station, Accra FM.

This comes barely 24 hours after rumours went viral that Shatta Wale had been shot by some unknown gunmen.

One of his team members, Nana Dope, alleged that Shatta Wale was ambushed by gunmen but he managed to escape and was battling for his life at a health facility.

The pastor on September 28, 2021, prophesied that the dancehall artiste will be shot on October 18, 2021. Shatta called his bluff.

Three men in civilian outfits and a driver in police uniform are said to have made the arrest at a time the pastor was waiting to appear on a show.

Reports indicate he has been taken to the Police Headquarters in Accra for questioning.

This is at a time the police say they went to the musician’s house through their investigations, and a number of health facilities but could not find him.

Meanwhile, the Director of Public Affairs, ACP Kwesi Ofori, has announced personnel are still on a manhunt for Shatta Wale to hear his side of the story. 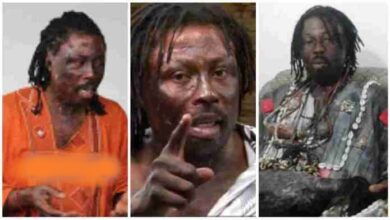