Princess Shyngle Rushed 2 Hospital After Another Suicide Attempt – Video. Gambian-born Ghanaian actress actress, Princess Shyngle, was rushed to the hospital in an ambulance after she attempted suicide again.

The actress, who attempted suicide in 2018, made another attempt on her life in the United States of America and is currently undergoing treatment in the hospital.

In a medical form and diagnosis slip she posted, it was revealed she was being treated for taking in some substances.

She was seen being treated for drinking some substances that jointly had an adverse effect on her.

Princess Shyngle blamed the attempt on her mental illness, captioning a video she posted “Depression is real. I gat this.”

Video : Female Drunk Student Disgraced Herself After Taking In Too Much Drink – Video

Three years after being rescued in Lagos, actress Princess Shyngle rescued after another suicide attempt in the U.S pic.twitter.com/fEwP3odiWP 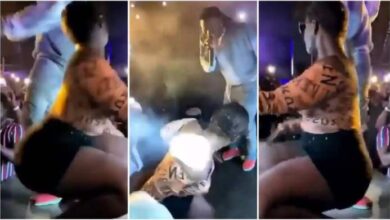