Publicity stunts are good; a part of the shaping of the entertainment industry, but they have their limit or utilization.

Just like anything else – too much of it could mean, over-egg’ing’ the pudding and that can be irritating – and OAP, Dr. Pounds is obviously irritated.

Dr. Pounds, on his show, ‘Hitz Gallery’ on Hitz 103.9FM, chastised rapper, Medikal for his use of publicity stunt to promote his song(s).

The presenter was agitated over the rapper’s decision to use the story of her break-up with girlfriend, Fella Makafui to project his KiDi-assisted single, ‘Comeback’.

“Medikal at this stage doesn’t need hype to push his songs,” he stated.

He also expressed that, his move to use the Fella stunt has got many observers angry, hence, their refusal to accept and push the song;

“The silly thing you did is what is making people not pay attention to the song. Stop the silly stunt to promote songs.”

He professed his admiration for the song in-spite of the backlash.

“This is a beautiful song. One of the best works of Medikal, I love it,” he said.

Medikal and Fella Makafui are back together after two weeks

Women are meant for the kitchen and bedroom – Bulldog 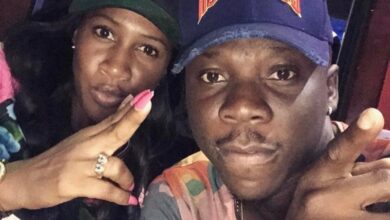