Popular Nigerian singer, Tiwa Savage, has sent a cryptic message amid her lɛakɛd video saga, which involved an alleged tαρє of herself and her lover making rounds on the internet.

Earlier this month, the Somebody’s Son singer revealed she is refusing to pay a blackmailer who obtained the tαρє of her and her boyfriend.

The Nigerian artist, who is one of the most successful Afrobeats singers, told Power 105.1’s Angie Martinez that her unnamed boyfriend accidentally posted the video to his Snapchat account recently.

However, someone was able to download the clip before it was deleted and is now trying to extort money from Tiwa in exchange for not releasing it publicly.

Tiwa initially thought of succumbing to the blackmailer’s threat of paying but later decided to call the blackmailer’s bluff and push out her narrative, after all, that what she did in the said video is something natural.

However On Monday night a tαρє was lєαked online. Although it has not been confirmed she is the one, the lady in the video bears a close resemblance with Tiwa Savage.

Since the tαρє went viral, the Afrobeats singer had been silent on the matter, as she went about sharing videos from her new song on her Instagram page.

However, on Thursday night, the singer shared a picture of herself with the caption, “Charge that sh*t to the game and never speak on it again.”

Though she didn’t state what or who she was referring to, it is pertinent to note that this message comes three days after she trended on the internet because of her alleged tαρє. 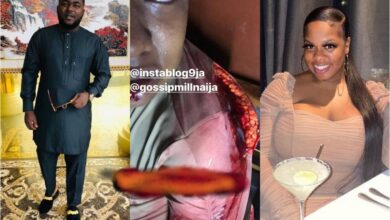