Video Of How A Guy Speeds Off With Someone’s Wife – Watch Here. Drama was witnessed along thika super highway after a man was recorded on a video dangling from a car after a man allegedly eloped with his wife.

In the video that was recorded just some few meters from the Gsu camp along thika road, pedestrian were heard shouting at the rouge driver who was still driving as the man was still hanging on the rear door.

According to reports, the two might have been partying at the same joint when the man, who owned a white Toyota vehicle, decided to elope with his wife.

A lady was heard shouting during the dramatic incident as the jilted man was seen confronting the driver who had reportedly taken his wife.

Despite endless pleas, the driver gave him a deaf ear as he struggled to open the door all in vain.

The middle aged man, whose wife was reportedly snatched, tried to get through the window as the merciless driver continue speeding oblivious of the danger he was posing to him and others.

Netizens have aired different reactions after the night incident, a majority have blamed the wife for getting into the vehicle.

However another group has said this was a mere agreement between the two and maybe the lady was fed up with the man.

Video Of How A Lady Embarrassed Herself While Using Mall Escalator 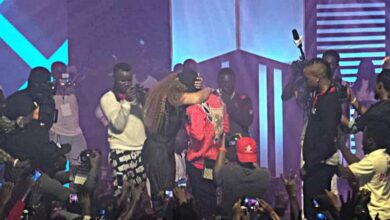