In a video sighted online , the boxer and his re-found love are seen sharing plastic chairs, side by side, as he pulls out a red ring case while promising her that he will marry her.

Excited, Queen Peezy gladly extends her left hand to him as he plants the ring on her ring finger.

The two seal it with a hearty hug as onlookers who are only heard in the video, explode in simultaneous excitement and handclaps as the two cement the moment in each other’s embraces.

This comes after Bukom Banku disclosed that it was not the first time he and Queen Peezy were together – he was with her before Patapaa met her, and that he was glad to be back with her after the musician fell out with her.

“Patapaa and I lived at Jamestown before he moved to Tema. I heard she was with Patapaa so I left her. Now, he is with the white lady from London so I’m with her now. We are dating now. When she gets pregnant, I’ll take responsibility. The girl loves me too much,” Bukom Banku said.

Girl Went Mad After Boyfriend Proposed 2 Her - Video Below 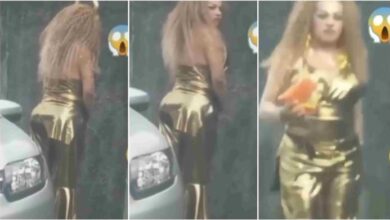